Prices of other veggies on rise after Onion

After Onions, prices of potato and other veggies on fire. Where onion is touching 200Rs/kg whereas tomato is at 18Rs/kg and Potatoes at 22Rs/kg.

Not just onion, the prices of potato and other vegetables have also fired up in the national capital last week due to the recent winter rainfall which has damaged the crops, as per the traders. The price of onions is 22 Rs/kg while potatoes are of 22Rs/kg and when it comes to other veggies, the wholesale rate of cabbage was Rs 7-10/kg while it was Rs 1.40-3/kg as compared to a year ago. Cauliflower at Rs 8-22.50/kg as against Rs 5-10/kg in the previous year, while carrot at Rs 4-23/kg as against Rs 2-12/kg, and capsicum at Rs 12-22/kg as against Rs 6-12/kg.

The reasons for the hike in the price are due to vegetable crops have been damaged and in some places, harvesting of onion and other crops has delayed due to water-logging in the farm fields. Not only the vegetables but the dairy products price have also increased in the National Capital. When it comes to cooking oil so it is also high, especially The Mustard Oil cost has gone high by Rs 15/kg liters.

As per stats, onion prise has gone high by 81% as compared to last month. Due to this, From the last few days, Indian Twitter has been flooded with memes over the onion price hike. Below are few: 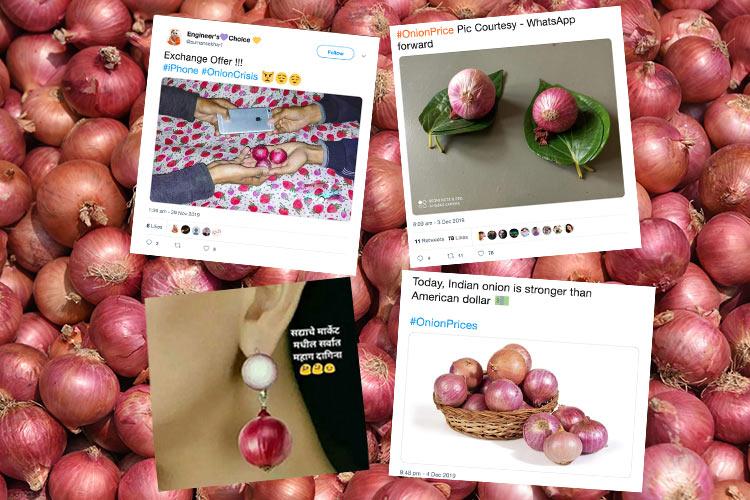 While People offer prayers to onions in Bihar to protest against the price hike. Lots of trolls have been made.

Below is the Onion Price tracker : On the other hand, as we can see, Jhansi is selling the onions at a very cheap price of Rs 35/kg, Udaipur, Rajasthan, and Gwalior, MP is second and third in the list of cities where onion price is lowest with Rs 50/kg only.

Due to crises and hike now Indian government has imported onions from the other countries. If this will be the condition then it will be very difficult for the middle class and below middle-class people to survive.